In brief
An oil well is a borehole into the earth, designed to enter geological formations that have been identified during the exploration process to contain commercially viable recoverable oil resources. It is created by drilling a hole of up to 1m diameter at surface into the earth with a drilling rig. The hole size steps down in diameter as the well is deepened.

Once the hole has been drilled, sections of steel pipe (casing), slightly smaller in diameter than the borehole, are placed in the hole. Cement is placed between the outside of the casing and the borehole. The casing provides structural integrity to the wellbore, in addition to isolating potentially dangerous high-pressure zones from each other and from the surface.

With these zones safely isolated and the formation protected by the cemented casing, the well can be drilled deeper with a smaller bit, and also cased with a smaller size casing. Modern wells often have two to five sets of subsequently smaller hole sizes drilled inside one another, each cemented with casing. 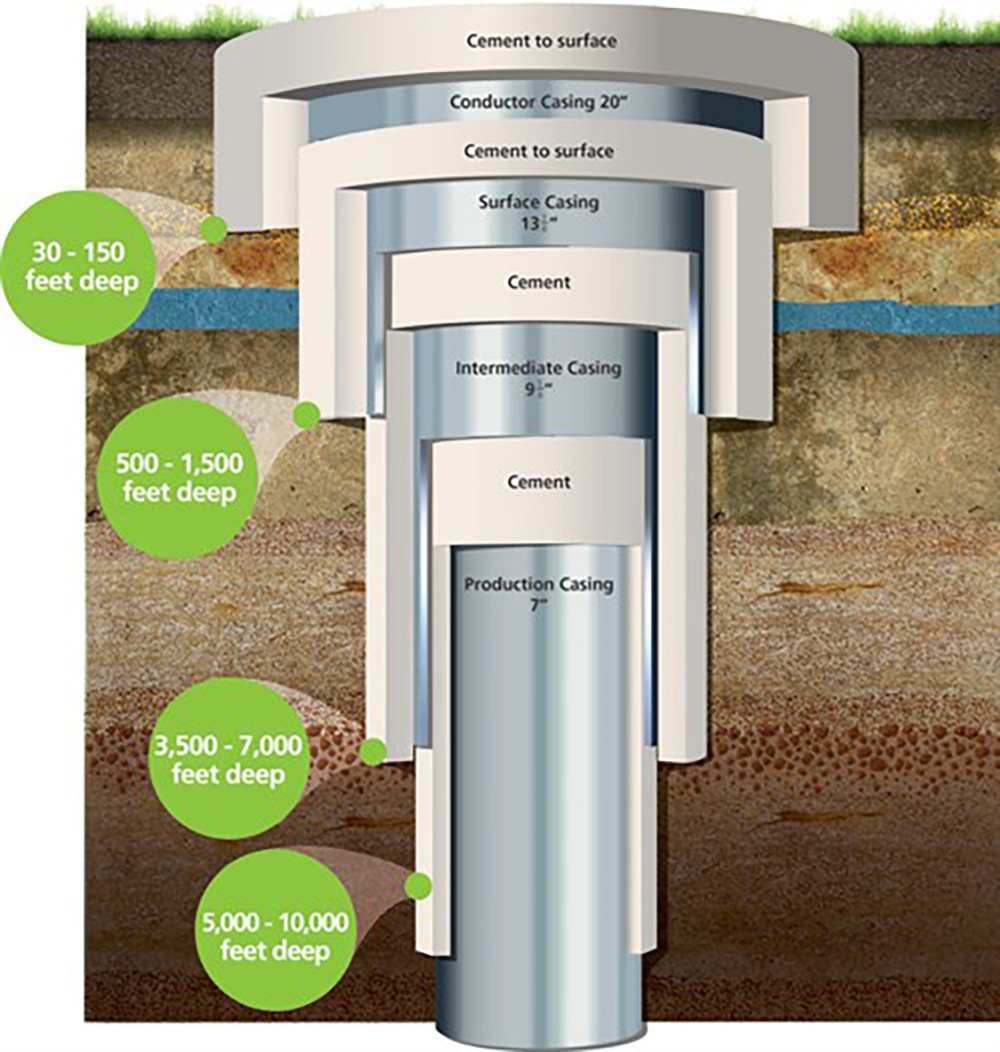 Enter the pump jack
Once the well has been completed, cased, capped and collared at the surface, a pump jack will arrive on site (see diagram) for assembly in order to start pumping oil from the well.

Pumps are used very widely in onshore UK oil production, as reservoir pressure and energy are typically quite low. This means that artificial lift of reservoir fluids via well pumping is required in order to achieve commercial flow rates. 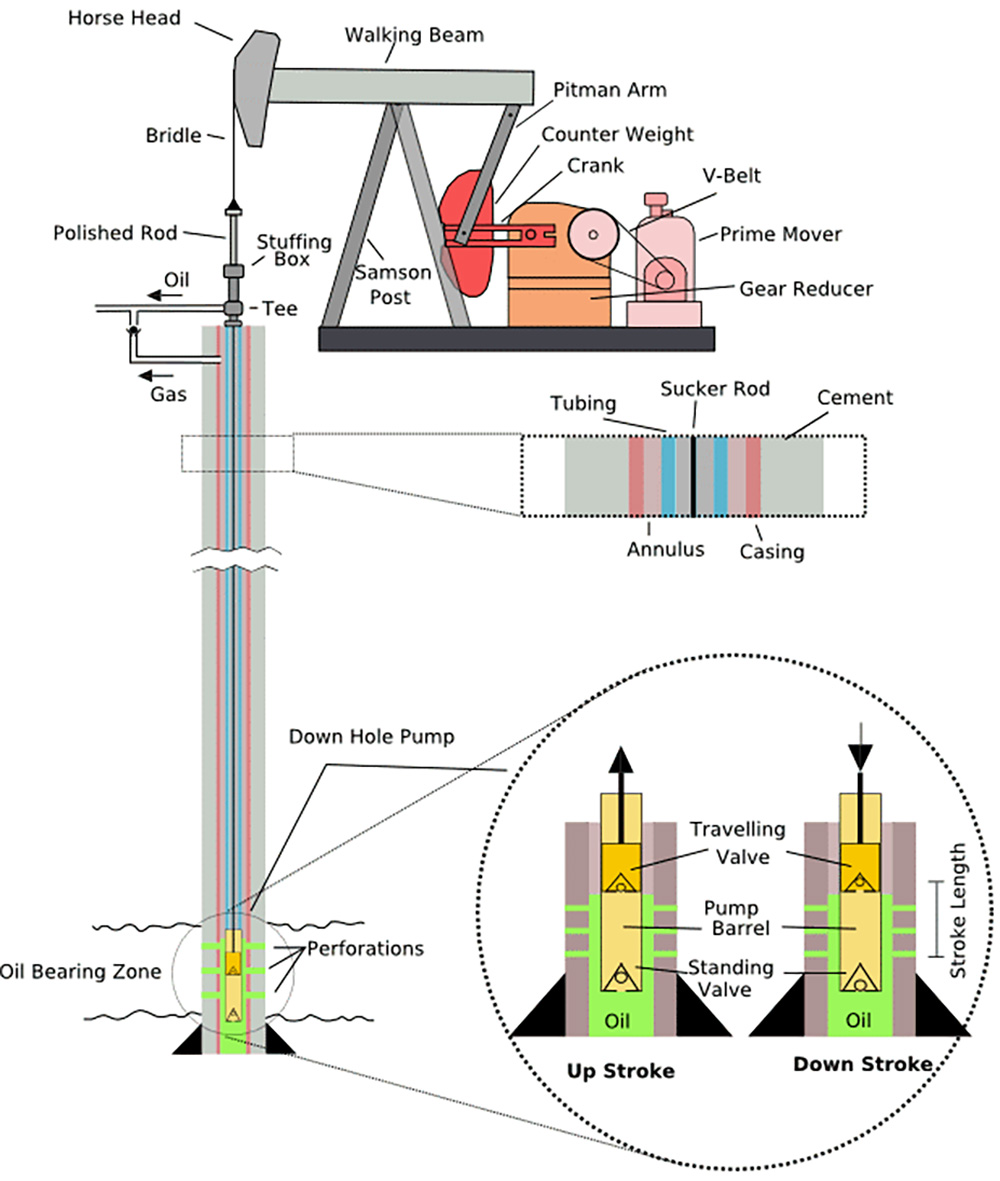 A pump jack (also called nodding donkey, pumping unit, beam pump, or jack pump) is the above-ground drive for a reciprocating piston pump that is used to help extract the oil from the well.

It is used to mechanically lift liquid out of the well, if there is not enough bottom hole pressure for the liquid to flow naturally all the way to the surface. This arrangement is commonly used for onshore wells, which typically UKOG will be developing. Depending on the size of the pump, it generally produces 5 to 40 litres of liquid at each stroke. Often this is an emulsion of crude oil and water, along with a small amount of associated natural gas.

Modern pump jacks are powered by electric motors, when electricity feed to the oilfield is made available, either through a grid connection or through a low noise diesel generator.

The prime mover of the pump pack runs a set of pulleys to the transmission, which drives a pair of cranks, generally with counterweights on them to assist the motor in lifting the heavy string of rods. The cranks raise and lower one end of an I-beam that is free to move on an A-frame. On the other end of the beam, there is a curved metal box called a horse head or donkey head, named due to its appearance. A cable, usually made of steel called a bridle, connects the horse head to the polished rod, a piston that passes through the stuffing box.

The polished rod has a close fit to the stuffing box, letting it move in and out of the tubing without fluid escaping.

Consequently, the pump barrel fills with the fluid from the formation as the traveling piston lifts the previous contents of the barrel upwards. When the rods begin pushing down, the traveling valve opens and the standing valve closes, due to an increase in pressure in the pump barrel. The traveling valve drops through the fluid in the barrel, which had been sucked in during the upstroke. The piston then reaches the end of its stroke and begins its path upwards again, repeating the process. The pressure the pump jack exerts on the well in this process serves to lift the emulsion of crude oil and water out of the well. This is then fed to a tank onsite where it is processed and stored before being collected by road tanker.

UKOG is able to recover oil from the limestone and sandstone formation deposits in the Weald Basin using this pumped recovery method. However, it should be noted that, for its new developments, UKOG is looking into the use of electrically driven downhole pumps that eliminate the pump jack on surface. This arrangement would have the dual benefits of less visual impact and less noise.

Please take a look at our project pages
Read More

Why is oil important?

Oil is an essential part of everyday life
Read More

There are currently no job vacancies at UK Oil & Gas PLC. We are aware of a number of fraudulent advertisements relating to careers at UKOG. Please ignore these advertisements.